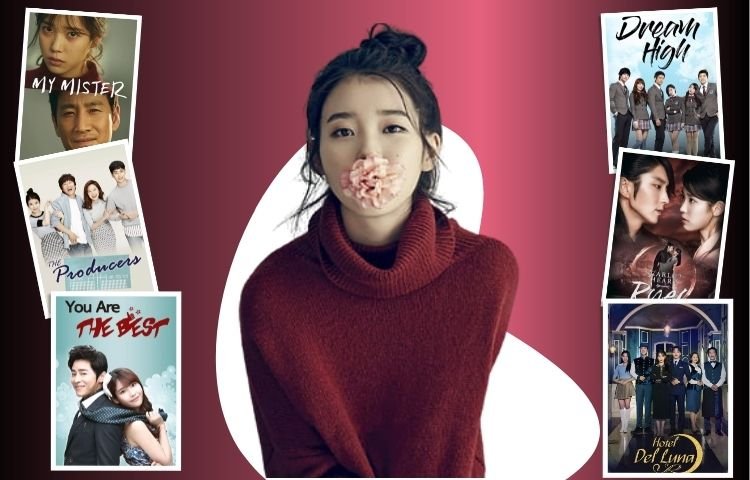 IU aka Lee Ji-Eun is undoubtedly a superb singer and composer. To our no surprise, she is an amazing actress too! Before jumping into the IU starrer Dramas and Movies, here’s her formidable journey.

IU made her debut as a singer through ‘Lost Child’ in September 2008. However, that special one that garnered IU stardom, was ‘Good Day.’ After this megahit song in December 2010, she earned the title of ‘Korea’s Little Sister.’

Alongside music, she tried her hands at hosting radio and TV Shows and then acting, which worked too. Making her debut via ‘Dream High’, IU gradually made it to the lead roles. She even earned significant acting awards. Thus, proving she’s good competition at acting too!

Moon Lovers is a mesmerizingly intriguing IU Drama. After the occurrence of a total solar eclipse, Go Ha-Jin ends up in the historical Goryeo dynasty.

Here, she is Hae-Soo, a 16 year old befriending several princes and at the same time mindlessly getting involved in the palace politics regarding the throne successor.

IU has an interesting role to play as Go Ha-Jin and Hae Soo. The painful life of a girl completely transforms into a historical fantasy as she drowns in a lake. Her righteousness is awakened witnessing Wang So’s pain. It is a journey where she struggles for power while empathizing and falling in love too.

Seemingly dark and gloomy, My Mister is one of the top-rated K-Dramas that make you stop and contemplate psychology. This IU Drama is about the emotional connection between two equally pain-struck individuals.

One cannot stop but get teary-eyed watching the catharsis they offer to each other’s scars while keeping parts of their lives hidden.

Brilliantly choosing her role in this Drama as well, IU has an effective role as a young woman in her 20s. Lee Ji-An is in need of money while living with her sick grandmother. She gets a temporary job at Park Dong-Hoon’s Company to retrieve his weak points. However, this task gives rise to her special and faithful bond with Park.

In this IU Drama Show packed with horror, comedy, romance and fantasy, we visit Hotel de Luna. It is an eponymous hotel amidst Seoul that serves only ghost guests.

Here IU plays the impolite owner’s role who is disgusted with her life at this hotel. However, her miserable life takes a turn with the entry of the new manager, Chan-Sung.

IU as Jang Man-Wol is the wicked CEO of Hotel del Luna. She exhibits a volatile personality that doesn’t compliment her beauty. Man-Wol is living the unpleasant atonement of the sins she committed nearly 1300 years ago. A terrible crime she doesn’t remember about.

The ‘firsts’ are always special and so is IU’s Dream High. A story of 6 friends who want to become idol stars. This IU Drama speaks volumes through its name, ‘Dream High’.

They get admitted to a performing arts school wherein they live through the beautiful journey of human relationships. Amity, romance, life and above all Music is what you feel in Dream High.

IU posed as Kim Pil-Sook who was body-shamed due to her exceeding weight. Kim’s low self-esteem and resulting shy personality kind of demoralized her from working towards her goals. Anyway, she possessed the innate asset of the perfect pitch.

A quite unique plot story of a team of young dynamic TV producers. The different members of the entertainment department in the KBS and a pop star work day and night. This IU Drama series featuring the hectic work life of different individuals is literally a package of comedy.

Not disappointing us with her choice of roles, IU fulfills Cindy’s role in The Producers. Cindy is a well-known singer and celebrity who entered the industry at the age of thirteen.

This celebrated personality is known as the ‘ice princess’ for her deadpan expressions and unrevealing cold behavior. However, behind this veil lies a fragile heart that had been kept hidden throughout.

A mind-provoking IU Drama that is about Lee Soon Shin who undergoes immense troubles after her father’s demise. The family finds it hard to be happy through these hard times. This isn’t enough hardship in her way as she faces fraud in her career. In any case, Lee is not someone who will give up!

IU who plays Soon-shin does justice to the character. Soon-Shin, who is quite different from her entire family for some reason, is a cheerful and brave girl.

Although she easily trusts people and gets duped she has a giving heart full of optimism. Her nature and positivity redefine Shin Joon’s sense of success.

This warm and mushy rom-com is about Dokgo Ma-Te who aspires to earn money using his looks. He heads on to date the top ten thriving women in Korea.

Dokgo comes across Kim Bo Tong who has been ardently loving him for 10 years. Will she get the same from Dokgo?

Kim Bo-tong, who is an ordinary girl next door, has an unreturned affection for Dokgo for quite a long time. She helps him prevail over the barriers on the way to meeting his father. Thus, IU plays the role of a pure-hearted girl who helps Ma-Te by being there for him while being madly in love with him.

Out of all IU Dramas, this K-Drama takes a different means to communicate its plot. It is a set of anthologies with 4 parts narrating 4 different stories but with IU as the lead in all. Uniquely made, this suspenseful IU Drama has been directed by different celebrated directors too.

In the first part, ‘Love Set’, IU plays the role of a young woman competing in a tennis match against the woman her father wishes to marry. ‘Collector’ features IU as an elegant woman before whom every man just doesn’t stop talking.

‘Kiss Burn’ is about IU retaliating against her amigo’s father. The fourth plot, ‘Walking in the Night’ is a magnetic plot about a couple who connect in their dreams to communicate those words which cannot be said in their conscious state.

1. Shades of the Heart

Chang-Seok is a writer who is back in Seoul after his divorce from his seven-year-old marriage. He is close to bringing out his novel which will comprise ideas from his anecdotes.

Regardless of such solid plans, he changes his mind and novel foundation after a few meetings with certain people. So, take the patience to consume the grace of this meaningful movie featuring IU.

Lee Ji-Eun, aka Mi-young, just like me is a partial loner. Mi-young is stuck between phantasm and actuality. She has no decisive path to life but does one thing for sure, which is loving her own company. Although she enjoys being by herself too she is open to befriending new people. 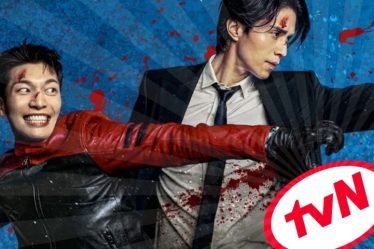 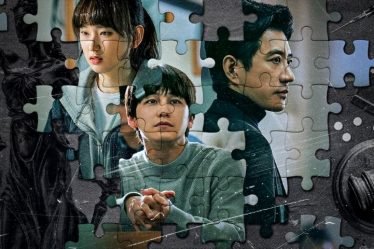