Korean dramas are currently the undisputable winners when it comes to popularity among Asian dramas. And the credit for this goes to the heart-melting romantic comedy Kdramas. People across the globe tune in to watch Korean rom-com dramas on Netflix and other streaming platforms with lots of love and excitement.

The first-ever Korean drama that I watched was a Rom-Com too and I liked it so much that I never stopped watching Kdramas since then. It is my love for these comedy-dramas that I am writing this article.

In this post, I’ll be sharing with you a list of 15 Romantic Comedy K-dramas that are very close to my and heart and I cherish them a lot. Hope you’ll like the list and find something for yourself to watch.

It is the end of 2018, and I make my first google search to pick my first ever Korean drama show. The moment I read the synopsis of What’s Wrong With Secretary Kim, I knew that this is something I would love. The show didn’t let me down anywhere.

To date, I am so obsessed with this show that I can rewatch it anytime. Since I am feeling evocative writing about it, I probably will watch it again.

Set up in a corporate sphere, it narrates the story of a self-obsessed VC named Lee Young Joon and his secretary Kim Mi-so. Kim has worked under Lee for nine years but hasn’t ever received any appreciation from him.

Kim now wishes to resign and move to a better place. However, it is hard for Lee to accept Kim’s demit, and his effort to make Kim stay with him leads to a comedic sequence.

Where to watch What’s Wrong with Secretary Kim?

With a fictional story, I’m Not a Robot induces realistic feelings. Though the creators place this as a sci-fi show, it is hilarious for the most part. It is the kind of show that will make you laugh you a** of on funny moments and cry like a baby on sad moments. I discuss the story overview below but it’ll be best to jump directly into it without knowing a bit about the story.

While being in desperate need of money Ji-A receives an offer from her ex-boyfriend to act like a robot in front of tech investor Kim Min Gyu. Ji-A accepts the offer but little did she knew the hysteric consequences of her acceptance. In no time Ji-A is caught up in a wacky situation. The lone element of her not being able to express herself puts so much drollness into the scenes that you just can’t get over it for weeks.

Where to watch I’m Not A Robot

This Kdrama can be streamed on Netflix.

One of the biggest selling points of this drama is the chemistry between the main couple and for a romantic comedy-drama that is the best thing. Every time the main couple were in one frame, I was blushing hard. The story is nice, the couple is super cute, and the drama remains funny for the most part.

Kang Joo Eun is a lawyer who gets dumped by his boyfriend of 15 years. So to get back at him, she requests Kim Yeong Ho, a personal trainer for Hollywood stars to train her to get back in shape.

Aha! Who wouldn’t love a show that talks about mermaids? Korean Mermaids, to be exact. The Legends of the Blue Sea is one such drama that brings together fantasy, romance, and action in just the right quantities to make it look great.

Inspired by a historical tale of a mermaid, The Legend of the Blue Seo follows the story of a beautiful mermaid named Shim Cheong who falls in love with a witty con artist Heo Joon-Jae. Heo is a comical character that will give you loud laughs throughout the show. The story may get predictable at times but it keps the viewers hooked at all times.

Where to watch The Legend of the Blue Sea?

Without even watching an episode of this drama, I knew it was going to be fun and I was completely right. Watching a straight guy pretending to be gay and people around him treating him as one is fun to watch.

Jeon Jin Ho is a straight guy but due to his habits of perfection, people tend to think that he’s gay. Park Gae In is a trusting woman who allows Jin Ho to be her roommate believing he’s gay but what happens when she finds out that he’s not gay and has fallen in love with her.

Where to watch this Personal Taste?

A drama about ex-married couples who bicker with each other but also care in difficult moments. Are you getting the Romantic comedy vibes for this Kdrama? The soul of this show is our two main leads, they acted so beautifully that when they are on screen, you can’t take your eyes off them. And it stays funny to the last episode which is quite rare in Korean dramas.

Na Ae Ra supported her husband Cha Jung Woo as much as she could when he was struggling but ultimately decides to give up and gets divorced. Years later she finds out that her husband has become successful. Calling it unfair, she decides to settle the score with her ex-husband and joins his company as an employee.

Where to watch Cunning Single Lady?

The rom-com kdrama is on Viki.

I am not a very big fan of historical dramas and usually, I skip them if I don’t find them interesting. But when I heard about Mr. Queen, I had to see it.

I am sure you’re guessing when the main female lead is acting as a male then how will we see romance? For that my friend, you’ll have to watch this drama because it is there along with tonnes of comedy. All I can say is that it is worth your time.

Where to watch Mr. Queen?

This drama is one of my most favorites It can give butterflies to anyone’s heart. The relationship of the main leads is so pure and sweet to watch. It is one of those Kdramas that makes you laugh a lot but then makes you cry too.

The show gets quite serious in the later episodes, but that goes out for every Kdrama in this list. I hope you know every Rom-Com Korean drama gonna make you sad or angry at some point in time.

Cha Dae Woong is a carefree guy who accidentally releases 500-year-old Gumiho (nine-tailed fox) from captivity. Upon release, the Gumiho takes the form of a woman and starts following Dae Woong and asks him to teach her how to be a human.

Did you ever had an experience where you didn’t want a show to end? I had one while watching Fight For My Way. It is one of the underrated Korean gems I highly recommend to everyone. It wouldn’t just give you unlimited giggles but present an absolute heartfelt story.

Ko Dong Man and Choi Ae Ra have known each other since childhood. The drama portrays them as underdogs who are stuck in third-grade jobs. Even though both have grown up to adulthood, their childlike attitude and whimsical manner haven’t faded away.

The show sets a benchmark for friends to lovers kind of drama. The story moves swiftly, it’s cute, funny, and a perfect time killer.

Where to watch Fight For My Way

Fight For My Way streams on Netflix.

Rooftop prince is one most funny kdramas on this list. It is a love story between a guy who is rude and lazy and a girl who kind and hardworking. When these two opposite personalities clash, we get to see some of the most beautiful comedy moments. And when the two start having feelings for each other, the romantic moments will make you heart-melt.

Crown Prince Yi Gak is transported 300 years in time from Chosun Dynasty to modern-day Seoul. There he meets Hong Se Na, a woman who resembles his dead wife. Yi Gak is determined to find the mystery behind the time travel and him meeting Hong Se Na.

Where to watch Rooftop Prince?

Strong Woman Do Bong Soon caught me off guard. It popped on my Netflix recommendations. I thought of giving it a try and today it is one of my favorite rom-com Kdramas.

This is certainly not just a superhero show as they show it in the trailer. It puts together an entertaining watch by combining romance, comedy, and a sci-fi story.

Do Bong Soon is essentially a “strong” woman who has inherited superhuman abilities from her mother. Although she tries hard to act normal and never make use of her powers, she finds herself in a situation where she must reveal her secret to the world.

Where to watch Strong Woman Do Bong Soon?

This also is available to stream on Netflix.

Rich Boy- Poor Girl plot is used in many romantic comedy Kdramas but no one did it more uniquely than Shopping King Louie. Although the drama takes a little time to rub on you nicely but once it does you’ll get mesmerized by the chemistry of our main leads.

Louis is a rich, lazy chaebol ( offspring of rich Koreans) who loves to shop. But an accident causes him to lose his memory and he becomes homeless. Koh Bok Shil, is a poor but hardworking girl who pities Louis and decides to help. Despite the difficulty, she supports Louis, and over time both start to have feelings for one another.

Where to watch Shopping King Louie?

Available on Viki for free.

There are many dramas made on the premise of a famous actress falling in love with a random dude. But what makes this drama so special is that the romance between a celebrity and a commoner seems very believable and their interaction brings a sweet smile to your face.

Oh Yoon Seo is a famous actress who joins a law firm to get experience for her role in a new drama. Kwon Jung Rok is a cold-hearted lawyer who at first resists but has to accept Yoon Seo as his secretary. As the two spend more time together, both start to develop feelings for each other.

Where to watch Touch Your Heart?

Another Park Min Young’s drama that made me like her even more and a bit jealous after watching the chemistry of the main leads. Her Private Life is a perfect drama for you if you are looking for a more mature romantic comedy kdarma where main characters act their age.

Sung Deok Mi lives a perfect life but she has a secret. She is a very big fangirl of a K-pop star. Ryan Gold is her boss who does not interfere in other’s life and keeps to himself. But when he finds out the secret of Deok Mi, everything changes.

Where to watch Her Private Life?

You’ll find it on Viki.

Korean Creators have mastered medical drama. It’s Okay, That’s Love is one comedy medical Kdrama that steps beyond the melodramatic story and talks rare yet important topic of mental happiness. Only Korean dramas have the capability to present such issues with hilarious bits of comedy attached to it.

The story follows two absolute odds, Jang Jae-Yeol and Ji Hae-Soo. Jang is a bestseller author and a radio jockey whose childhood traumas have to lead him to obsessive-compulsive disorder. Ji Hae on the contrary is a kind-hearted psychiatrist. Despite being opposites they are able to find love between their hateful encounters and continuous bickering.

Watch it on Netflix. 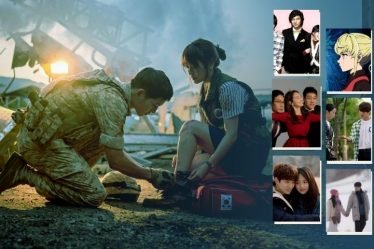