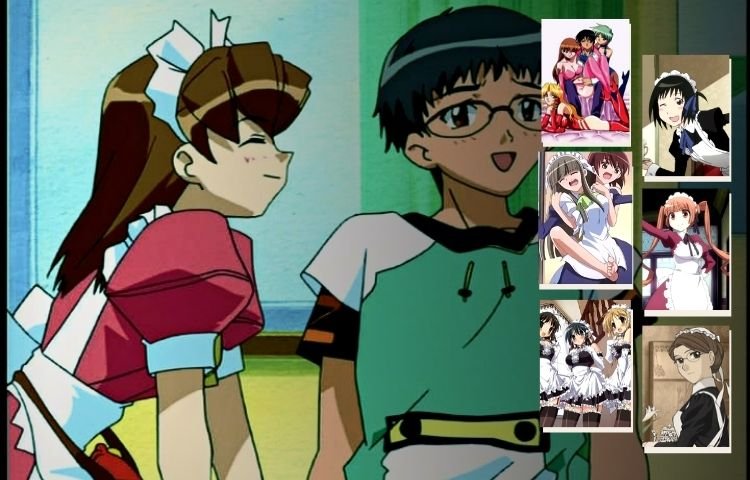 Looking for some good maid animes to watch? Well, your search ends here. I am delighted to present to you the most extensively researched list. And as a ‘Woman of Culture’, you can trust my credibility.

I’ve been a huge fan of the maid cafes culture of Japan and that inspired me to watch my first maid anime and the rest is history. In this post, I’ll be sharing with you the 15 Best Maid Animes that you can binge-watch anywhere anytime.

I guess my love for comedy series has paved its way to this list. You’ll love this maid anime from starting till the end.

Not just the story, the animation, characters, story structuring are all done nicely and make this anime a treat to watch.

Hotori Arashiyama joins a Seaside Maid Cafe to pay off her school debt. Her friend Toshiko runs the cafe. Toshiko knows how to run the cafe but has no interest in working in it.

There is only one reason why Toshiko is still there at the cafe. That is because of Hiroyuki(Hotori’s childhood friend) who is regular at the cafe.

The originality of the series is its biggest USP. Famous amongst the majority of youngsters, I would recommend it for all anime lovers.

Taro Hanaukyo’s grandfather invites him to stay at his place after his mother passes away. A beautiful maid Mariel tells Taro that his grandfather has retired and moved away to a remote island.

She also told him that his grandfather has given him ownership of his place.

Surrounded by several maids 24*7, Taro’s life is to envy for all. But, it’s not all hunky-dory and Taro got to manage it all.

What makes this list of maid animes good is the variety in the story. And the reason that makes this maid anime unique is the fact that the maid in this anime is the size of a small doll.

And that is not all, Hand Maid May is a fun-to-watch show and is a great pass time.

Kazuya Saotome is a second-year engineering student at Ochanomizu Industrial University. His rival Kotaro Nanbara gives him a computer program that was supposed to help Kazuya but is instead a virus.

To fix his robot he orders a cyber doll May. She is a palm-sized robot who cares about Kazuya. She helps Kazuya and teaches a lesson to Kotaro.

In an attempt to take away May from Kazuya, Kotaro takes help from other cyber dolls. What will happen next only time will tell.

This maid anime is unlike any other. The MC of this anime is a male who identifies himself as a maid and wears the clothes of a maid. He is funny, strong, and committed to his job.

It is a good anime that will surely tickle your funny bone. If you find the premise interesting then I am sure you’ll enjoy the anime as well.

Naeka Fujiwara, the granddaughter of a multi-billionaire, is the only heir to the fortune. She will receive the inheritance upon reaching the age of 18. Many rivals would anything to get those billions.

Naeka is protected by a guy maid named Kogarashi and a maid called Fubuki. Will they be able to stop the powerful rivals? Or will they be defeated?

Are you into lolis? Just kidding, you don’t have to answer. But if your answer is no then this maid anime might make you a bit uncomfortable. Overall,

Uzamaid is a fun show that’ll make you laugh and cringe. Give it a try in your free time.

After Misha Takanashi’s mother passed away, she moves in with her Japanese father. She is a second-grader and is half-Russian half-Japanese.

Misha’s father employs Tsubame Kamoi as their housekeeper. Though her work is limited up to the house she is obsessed with lolis and tries to come closer to Misha no matter how much she runs away.

A comedy roller-coaster, He is My Master made every inch of my cheek pain with laughter. The pranks and comic twists in the whole series were on some other level.

This maid anime was just a reflection of my fantasies and I enjoyed it quite a lot. Can’t say much about, whether this will suit your taste or not.

Yoshitaka received a gigantic inheritance after the death of his beloved parents. He fired all the old maids and hires two runaway girls Izumi and Mitsuki. A third maid joins them named Anna.

Yoshitaka spends his whole day pulling pranks on these girls and teasing them.

Heist stories have taken up the viewers by storm. Some people follow heist-related movies/series religiously. After all, the actions that we see when a thief is running away cannot be compared with anything.

So, I thought why should we skip out on one? Though technically not a maid anime, I decided to put this anime on this list because it got hot anime girls working as an assistant to the MC.

Muon Sorata is the heir of an infamous family known for their thefts. They go by the codename ‘Mouse’ and nobody knows who they are.

Sorata keeps the family tradition alive and along with the help of three assistants/maids, he takes dangerous heist missions while maintaining his cover as a professor.

A Little Princess Sara has been nominated as the best 100 Japanese anime series of all time. It beautifully depicts the plea of a girl named Sara.

Bullying, poverty, child abuse are some of the topics that have been highlighted throughout the series. This maid anime makes you think deeply about people’s psyche and is a good one-time watch.

Sara belonged to a wealthy family. She had everything and went to an all-girls-seminary boarding school in London. Everybody loved her and she was good at her studies as well. One fine day tragedy struck into Sara’s little paradise as she got the news of her father’s passing.

Her family was left with no money and she turned orphan. Taking advantage of the situation school’s headmistress Miss Minchin treated Sara very badly and made her an unpaid servant at school.

The rest of the series follows the life of Sara as she struggles through her life.

The 12 episodes of this humourous maid anime will make your stomach hurt with laughter. The MC of this anime is a trap character. Each scene is a jolly ride that you would love to hop on.

I watched the whole show in one go. It was so hard to stop watching it until I hit the final episode and felt bad when it ended.

Chihiro Komiya is an enthusiastic elementary schooler who is taken in by his uncle after the death of his mother. Although wealthy, the uncle’s mansion was messy.

Chihiro being a clean freak employed himself as Uncle’s maid and asked to get paid every month.

6. Kimiaru, They Are My Noble Masters

This maid anime is not the best one out there and neither is the MC of this anime is a maid, but a butler. Though overall the anime feature few very beautiful maids and rich girls all fawning over our male lead.

If you’re in a mood to watch something casual then this maid anime is a good watch.

Ren Uesugi ran away with his sister from home due to family issues and finds shelter in the Kuonji family’s mansion.

They were employed as servants for three Kuonji sisters: Shinra, Miyu, and Yume. Ren must look after his mistresses’ needs as well as deal with other servants and the guests/friends of the Kuonji Sisters.

The story of this maid anime is set in the Victorian Era. It was a difficult period for all, especially women and the class divide was huge.

Emma is the love story of a maid and a rich man in a harsh world. This maid anime is unlike any other on this list, it is serious and makes your heartache. If you are up for a serious story then, do give it a try.

Emma, the lead of the series is a maid at a retired Governess, Kelly Stownar’s house. One day a handsome man named William Jones pays a visit to Kelly’s residence. Emma greeted William at the door and, he was smitten with her beauty.

As every love story has its fair share of struggles, so did Emma and William’s. Belonging from a rich family William had the burden of his family’s legacy. Will these love birds ever meet? Will society accept their union?

Popular:  18 Deadly Anime Weapons that every Anime Fan wants to Own

Can you find the love of your life while you are on a search for a maid? Interesting question, right? Well, the answer lies in this fabulous series.

It is one of my most favorite maid anime. I love how this series has a whole mixture of love and action in it.

Suguru is an ordinary orphan boy whose life’s about to change when Mahoro enters his life. Mahoro is a very powerful battle android that will soon wear out. But before she stops functioning completely,

Mahoro decides to spend the rest of her days as a human. She chooses to become Suguru’s maid. The story moves forward with their bitter-sweet interactions.

3. The Duke of Death and His Maid

This is the most recent maid anime that I watched and it is still very fresh in my mind and that is why I might be a little biased towards this anime.

It is a very sweet anime of two people in love despite all the hardships in their lives. It was a total joy watching this anime.

The young Duke is cursed when he was a child. Whatever he touches, dies. He spent the majority of his childhood in isolation due to this curse and became very depressed. Until Alice comes into his life as his maid and keeps him company.

Eventually, he falls in love with Alice but his evil power won’t let him touch her. He decides to find a cure for this curse and live a peaceful life.

Written by the ace manga writer Hiro Fujiwara, Maid Sama is an epic tale of a love story that has loads of hurdles. But as they say, love wins it all.

While watching this maid anime, I went into an emotional roller-coaster ride. Every scene in it is pure gold. Maid Sama is something I would love to rewatch when I get the time.

Misaki is a righteous and upright student council president. But she has an embarrassing secret that she doesn’t want anyone to know. She works as a part-time maid at a maid cafe.

When Takumi, the most popular boy in the school finds out about Misaki’s secret, he decides to use it as an opportunity to get closer to her.

I am a sucker for fantasy dramas and I love anime maids. So watching this anime was a no-brainer to me. This fantasy comedy maid anime is no less than a jolly ride that you want to be a part of.

The concept of the series is fresh and, it keeps the viewers crave for more.

Kobayashi, our female lead, is an office worker and a programmer. One night, drunk Kobayashi went into the mountains and she met Tohru, a dragon.

Tohru took a liking towards Kobayashi. Tohru transforms into a girl and requests Kobayashi to let her stay with her as a maid. 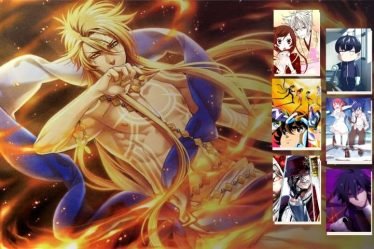 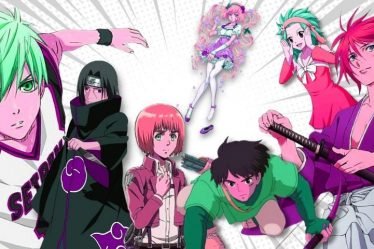 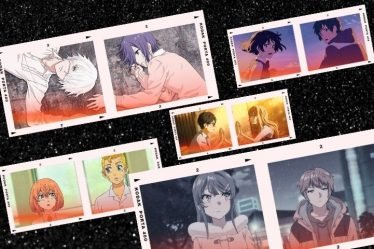