20 BEST MECHA ANIME THAT WILL HIT YOU LIKE STEEL 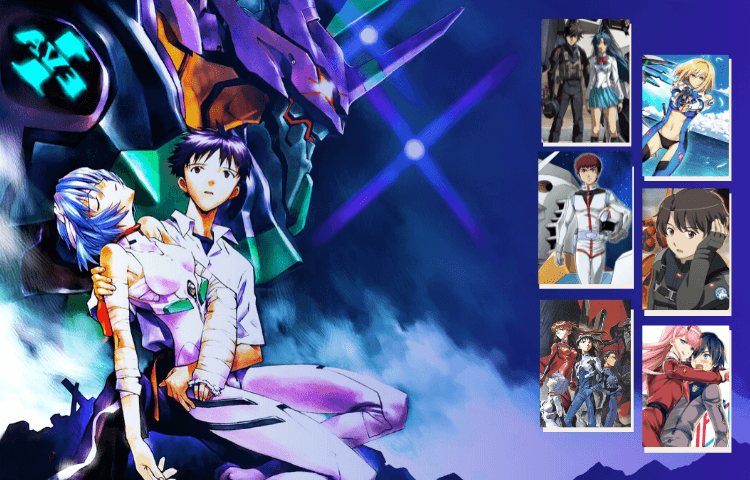 It won’t be wrong to say, the most action-packed animes are the ones with Mechas (Robots, cyborgs, androids) in them. I’ve been a Mecha anime fan for years now and one thing’s for sure that nothing can compare to the popularity of a super mecha anime.

Robots are already very famous in Japan and over the years many animes have been created that picturise the marvelous sci-fi innovations of mass destruction.

In this post, I’ll be sharing with you the list of 15 Best Mecha Animes of All-time and 5 more as Honorary mentions. Hope you’ll find some good animes to watch from here.

If I ever make a list of the best anime ever made, Code Geass shall definitely find its place in the top 20. Talking about its mecha element, Code Geass is a show that bombards you with epic visuals, dynamic robotic action, and top-notch character depiction. Watch it if you are looking for a fast-moving story.

The story sets in a futuristic parallel world where The Holy Britannian Empire has taken over the world. They are ruthless and treats Native Japanese people with disgrace.

Lelouch Lamperouge is one unfortunate Britannian who had to witness his mother’s death and wants to take revenge. He vows to bring misfortune on the Britannia Empire. He gets his shot at redemption when he gets supernatural powers of ‘Geass’ which he receives from a mysterious girl.

I consider the sci-fi characteristics of a show secondary to its entertaining force. Full Metal Panic! is one such anime that will give you a delightful dose of entertainment. This fast-paced packed anime sums up in just 24 episodes. It is a well-done show highly recommended if you are like comedy anime.

Extra: Don’t dare to watch the English dub. It sucks.

The show talks about a high-tech military organization named Mithril. The organization aims to wipe out terrorism and every other evil that is a threat to human existence. Sousuke Sagara is a clumsy sergeant working in the Mithril regiment.

He is assigned to safeguard a whispered orphan girl Kaname Chidori. The interesting catch is that Sousuke isn’t allowed to reveal his identity to anyone and not even Chidori.

Sousuke isn’t exposed to social life and does not know about living like a high schooler. Disguising himself as Sousuke’s classmate he sets to save herself from the adversity she is about to face.

3. Ghost in the Shell

Released in the year 1995, Ghost in the Shell talks about a scenario set up in 2029. The futuristic speculations made by the creators about the year 2029 make us feel quite an underachiever in the world of modern science and tech. The show talks about cyborgs and ultramodern concepts like creating a programmable human brain. In case you have a tech-savvy brain good enough to comprehend all of this. Just don’t miss this masterpiece.

It’s the year 2029, massive advancements have been made in the field of the internet and science. People can replace their limbs with steel robots, connect brains to the internet and modify genes.

With this advancement, there has been an upsurge in cybercrimes. To deal with rampant internet terrorism Major Moto Kusanagi is appointed as an offer of cybersecurity who herself is a cyborg woman with superhuman-like abilities.

Then comes the real OG. A show that set the benchmark for mecha animes. Mobile Suit Gundam is an anime classic that functioned way ahead of its time. It is a show that shall be remembered long for the mecha legacy it has left behind.

Discarding the human calendar, date and time now functions according to universal standards. It is the universal year 0079, and the Earth Federation is at war with the Principality of Zeon. Amuro Ray is a teenage pilot who is a Gundam pilot.

Gundam is a giant robot packed with devastating artillery. Amuro and many young boys of his age have no option left but to take over Earth federation Gundam and become soldiers in the fight against Zeon.

After reading the logline, I am sure you are thinking that it is another childish anime with kids playing with robots. But I’ve to tell you this anime is a lot darker and depressing and definitely does not suits everybody’s taste. If you are emotional then keep some tissues with you while watching this mecha anime.

15 children are tricked into signing a contract that forces them to operate a mega robot and fight 15 different alien invasions with it. The giant robot uses its pilot’s life energy to function and can kill the pilot if operated rashly. Bound by the contract now each child has to fight with alien species to protect the world and try to protect their own life.

Next up, we have A1 Pictures studio’s first attempt at a mecha anime. As far as Aldnoah.Zero is concerned its hype among the mecha genre shows makes it hard to ignore. Although it is not a unique robot anime story, it depicts high-quality animation, epic music, and battle sequences.

The Appolo 17 mission discovers something which is about to change human existence forever. A Hypergate that lets humans travel instantaneously to Mars. Human’s effort to colonize Mars gets easy as possible.

The Martians who set to colonize Mars discovered an advanced technology that let them be self-sufficient in their resources. Eventually, they broke ties with the Earth and called themselves the Holy Vers. Fifteen years after the discovery of Hypergate, The Holy Vers declares war against the Earth, descending giant artillery from the sky with an intent to wipe out humanity on the Earth.

After the super success of ‘Mobile Suit Gundam’ that was released two years prior, Macross made it absolute that Mecha animes are here to stay. It is an OG anime that is part of the legacy and rise of a new sub-genre of action animes i.e. mecha.

After a mysterious spaceship crashes into earth, it is decided by United Nations to repurpose the alien ship and calls it Macross. When suddenly many alien spaceships attack the earth, Macross automatically destroys all of them causing an intergalactic war.

Are you up for some power-packed female action? Cross Ange is an anime filled with badass women and tonnes of fan service. The first few episodes may gross you out a little bit but once you are past that, the story progresses quite amazingly and you’ll not be disappointed after watching it.

In a world where people possess a power called ‘Mana’, those who don’t have this power are considered outcasts and threats to civilization. When Angelise Ikaruga Misurugi, the first princess of the Misurugi Empire is found out to not have ‘Mana’, she is sent to a remote military camp and as punishment, she is made to fight vicious beasts with mechanical robots.

If you have watched children’s anime line Digimon and Beyblade then you must have an idea of Eureka Seven. People often ask me to don’t compare children’s anime with regular animes. But I believe that anime of each type has its specialty. Especially children’s anime can’t be skipped because we grew up watching them. If haven’t been able to get over your childhood anime Eureka Seven is worth giving a try.

The story revolves around a 14-year-boy named Renton Thurston who is desperate to move away from his home. He wants to change his mundane life and wishes to work with Gekkostate, a mercenary group. One day his garage is crashed by a young girl named Eureka and her robot- Light Finding Operation. This encounter proves the beginning of Renton’s involvement with the Gekkostate.

Most of the animes featured in this list bear depressing or serious stories which are all good, but once in a while, you need something chill and light-hearted to watch. So, if you are looking for such kind of mecha anime then I’ll recommend you to watch this one.

Ernesti Echevarria was an otaku living in Japan before he died and was reborn in a new world. In this world, people use powerful mechs called Silhouette Knights to fight horrific demonic beasts. So Ernesti decides that in this new life, he will live like a normal person and enjoy the adventures.

It is one of those animes that couldn’t achieve greatness because it couldn’t reach up to the high expectations of the viewers. But that doesn’t mean it is bad. Suisei no Gargantia brings forth a really nice story that deserves your appreciation and watch time.

In the distant future, humans have moved away from earth and settled all across the galaxy. They formed Galactic Alliance to protected humanity from all dangers and Ledo is a 16-year-old lieutenant of Galactic Alliance who pilots a humanoid called Chamber.

One day while fighting monsters, Ledo loses control of Chamber and crash lands on Earth. With no choice left, Ledo tries to get accustomed to his new life on Earth but a new threat is on its way.

Neon Genesis Evangelion another mecha anime classic that portrays an exciting fantasy world full of mecha, cutting-edge technology, excellent animation, and unique music. Must try if you are new to the giant robotic anime scene.

It is the year 2015, a futuristic era concerning the show. Like other sci-fi anime, the Earthers are threatened by an attack from alien invaders. Humans ‘ only hope is the “Evangelion” giant robotic machinery capable of taking down enemies bigger than themselves.

Although the military has the assets to fight, they are in hopelessness. The Evangelion can only come to use with the mind of children. In this situation, Shinji Ikari, a 14-year-old son of a commander in chief is selected as a pilot for Evangelion.

Tengen Toppa Gurren Lagann is an inspiring story that will level up your anime game. It is a show that touches you from the core and rises above the level of just an entertainer. A gripping story, robust sci-fi depiction, comedy, and boldness are some of the elements that hold the show together.

Kamina and Simon live in a secluded village and haven’t ever explored the world past their home. One day an excavation drill leads them to a mysterious-looking object that turns out to be the key of an ancient war artifact. The curiosity leads them to the surface world where they fight with the war artifact to take back what once belonged to them.

Although it is a common trend with mecha animes that most of the plotlines revolve around apocalyptic scenarios. But that doesn’t mean it is boring to watch mecha anime. Let’s take this anime for example, who doesn’t like aliens attacking humans and humans fighting back with robots in space. There’s so much thrill and action.

An alien invasion has brought the humanity on brink of extinction. The few left humans escaped on spaceships and are scattered across the galaxy. When one of the spaceships comes under alien attack, Nagate Tanikaze along with his fellow soldiers and friends decides to defend the ship and defeat their alien foes.

Its been a long time since I watched Guilty Crown but when I decided to write a post on mecha animes, it was one of the first few animes that came to my mind. Though I can’t say it a masterpiece, it has all the necessary qualities for you to have a good time while watching it.

In 2039, Japan is under unjust and strict military rule. Funeral Parlor is a guerrilla group that fights for Japan’s liberation. Shuu Ouma is a normal high school student but when he runs into Inori Yuzuriha, a key member of Funeral Parlor, Shuu obtains the “Power of Kings”—an ability which allows the wielder to draw out the manifestations of an individual’s personality, or “voids. 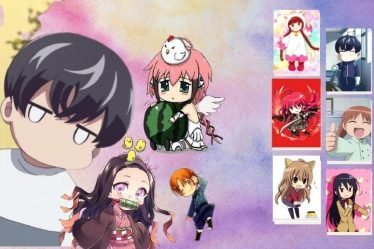 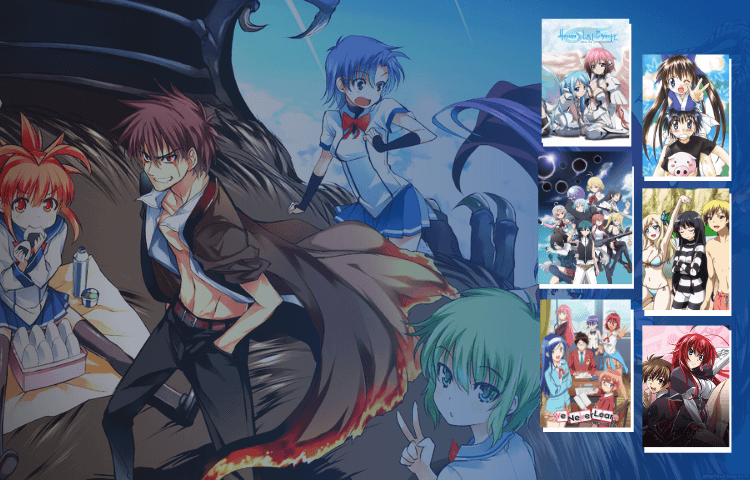 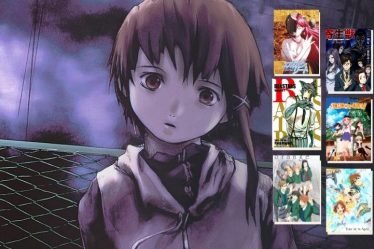